About a week ago, the Norwegian company Gastronaut gave me a good offer on a Primo Oval XL grill (this happened sort of by chance via my BBQviking Instagram account, btw!). I had been researching kamado style grills and other types of smokers for a long time already, thinking about upgrading from my two standard Weber kettles. I long considered Weber’s WSM, some insulated smokers like the Chubby from Backwoods Smoker, and other alternatives.

The more I researched and thought about it, the more a kamado style grill/smoker looked like the best alternative for me. It would allow me to get a better grill for hot and fast type cooking (especially for Norwegian winter conditions) and a smoker at the same time. Best of both worlds. The Oval shape of the Primo appealed to me, and seemed to give me the most cooking space for my buck -. Which is important, because I often cook for 8+ 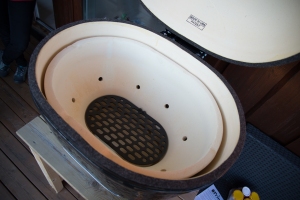 That one time the inside of a kamado was clean and bright. This can’t last

people.  I had been eyeing the Big Green Egg too of course, but they seemed way overpriced, especially here in Norway

Last Monday, the magic happened – I could pick up my new Primo Oval XL from the dealer. It barely fit in my boxy, boring people mover, and it was heavy! Had to call a friend to help me come over and put it on a makeshift table/stand I had built for it! I opted for the model with no stand, because I have some plans for a simple outdoor kitchen/bench this spring on my deck anyway. More on that later!

I have had 4 cooks on the thing this week. A couple normal grilling sessions with direct and indirect cooking, and one long, low and slow cook last Saturday, with two big pork butts and some Norwegian beef ribs – aka “bibringe”.

So, what are the biggest differences between the Primo and my two Weber Performer grills? Let me give you a list of things I noticed using the Primo this first week:

All in all, I am very pleased with my newest grill so far. The only downside I see is that it takes a little while to get it up to temp, but I will be working on testing different methods and ways, some of that could be my lack of experience with kamado style grills too.

Full disclosure: I got a good price on this grill+accessories to have it appear on my blog at times in photos etc (which it would’ve without the discount too, to be honest). But then I figured it would be fun to write some about my experiences with it too as I know a lot of people are looking at kamado style cookers these days.

I live in Norway, where the selection of grills and accessories is pretty scarce, so I have some good ideas and experiences when it comes to how to make do with a pretty simple 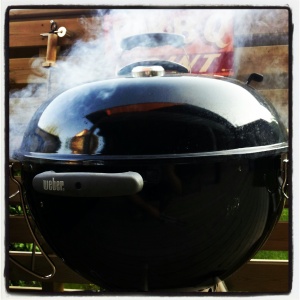 setup. Here’s my opinion on what you need to get started doing real low & slow BBQ.

In Norway, gas grills are increasingly popular. I have one myself, but it’s been standing unused on the patio since I got my Weber kettle last year. I don’t recommend anyone to get a gas grill if they plan to do some slow-cooking at low temperatures. If you must have a gas grill for this, get an expensive one that has a separate burner for a smoke chamber. On the regular gas grills, making smoke usually means keeping at least one burner on half or full, which means it will get too hot in the grill for doing things like pork butt.

There’s actually a lot of stuff you can do with this very basic type of grill. As long as you have a lid, some valves for temperature adjustment and some creativity and DIY skills, you can do all sorts of fun stuff with a basic Weber kettle or similar. And they’re fairly cheap, last long, and have spare parts readily available. All in all the best place to start. It can do direct grilling, indirect grilling. I even make 12-16 hour pork butts and beef ribs on my Weber kettle with nothing but briquettes and smoke wood, and a steel pan from Ikea full of water to help me keep a steady temperature. Using this setup I’ve managed to keep a steady temp of 100-110 degrees centigrade (210-230F) for many, many hours. It takes some effort, practice and skill, but that’s also what makes the food taste extra good when it’s done, isn’t it?

Based on my experience, here are my recommendations for a good, cheap and versatile setup that will bring you years of BBQ joy: